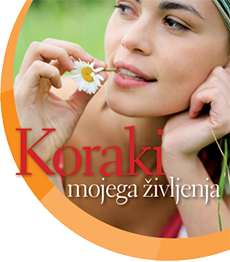 Organised population-based cervical cancer screening programme and registry ZORA has been introduced in 2003 with conventional cytology every 3 years for women aged 20‒64 years, after decades of opportunistic screening. The program is well accepted amongst Slovenian women, 72% of women in the target group attends screening in 3-yearly and 86% in 5-yearly intervals.  Cervical cancer incidence is decreasing since the implementation of the programme, with an age-standardised incidence rate (world) of 6–7 new cervical cancer cases per 100,000 women, Slovenia pursues the global WHO cervical cancer elimination goals and targets.

Cervical cancer is the most preventable yet still 4th most common cancer among women worldwide, with 85% of its burden in less developed countries. This is why on 17th November 2020 the WHO launched a Global Strategy to Accelerate the Elimination of Cervical Cancer as a public health problem with clear targets: by the year 2030, all countries can achieve 90% HPV vaccination coverage, 70% screening coverage, and 90% access to treatment for cervical pre-cancer and cancer, including access to palliative care. 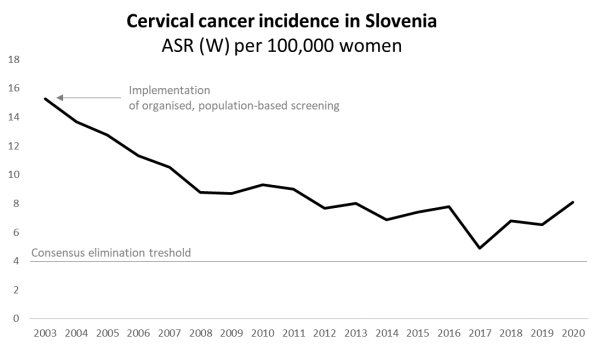 The highest recorded incidence of cervical cancer in Cancer Registry o Republic of Slovenia was 27 cases per 100,000 inhabitants (world standard) in the early 1960s, making Slovenia one of the countries with a historically high burden of this cancer. The incidence initially decreased due to opportunistic screening, which – similarly to Eastern European countries – stopped yielding results in the early 1990s, as the incidence began to increase. In 1998, a pilot organized screening programme was introduced, first in central Slovenia, and later in two more regions. In 2003, the organised population-based cervical cancer screening programme and registry ZORA was implemented, reducing the incidence of cervical cancer in Slovenia to its historically lowest values, which are comparable to European countries with the lowest burden of this cancer. In the recent years in Slovenia, approximately 100‒120 women are diagnosed and 40‒50 women die every year because of cervical cancer. With an age-standardized incidence rate (world standard) of about 7/100.000 and mortality rate of about 2/100.000 women, Slovenia is one of the European countries with the lowest cervical cancer burden.

Slovenia has introduced school-based national HPV vaccination program in 2009 for the girls aged 12‒13 years; the catch-up programme is available until the end of schooling. HPV vaccination coverage has increased for 10-percentage points in last year and reached 60% in a school years 2018/19. For more information, please refer to the webpage of National Institute of Public Health.

Cervical cancer data was obtained from the Cancer Registry of Slovenia, which is a dynamic database with possible changes in the number of new cases. Number of new cases is regularly updated in case of major changes via the website ZORA (zora.onko-i.si). More information on cervical cancer and CIN3 can be found on the website SLORA (www.slora.si), with unlimited acces to information on cancer in Slovenia and worldwide.